The ODND line is inspired by classic roleplaying games from the 1970's and early 80's. Updating them for a modern audience, retaining the classic feel, and reinterpreting them into new genres. 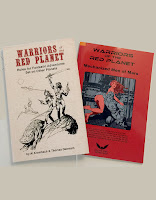 Warriors of the Red Planet: inspired by the tales of earthmen traveling to other planets and exhibiting super human powers due to the differences in gravity and atmosphere from earth. This genre is also known as 'Sword & Planet' which inspired Flash Gordon, Superman, Planet Hulk, Avatar, and Star Wars.

Colonial Troopers: inspired by the Golden Age of Science Fiction by authors such as Robert Heinlein, Isaac Asimov, Arthur C. Clarke, Frank Herbert, and many others. It is a hard sci-fi roleplaying game of soldiers in powered armor defending the human colonial empire from the incursions of hostile aliens.

Guardians: inspired by the Silver Age of comics where heroes were more than two-dimensional super humans in colorful outfits. A deep but extremely simple system for creating super powered beings is featured along with a sandbox style world of heroes and villains.

Raiders!: the pulp adventures roleplaying game set between the two world wars. In Raiders! you play archeologists and treasure hunters seeking ancient relics, some of them containing mysterious, maybe even supernatural, powers.

Freebooters: adventures in the age of pirates in the caribbean.

Murder of Crows: in collaboration with Atlas-Games and Pencil First Games, Murder of Crows is a fast playing light strategy card game where each player is trying to be first to spell the word MURDER. Each card you play has an effect like taking someone else's card, drawing a new card, or affecting their Murder, this can be thwarted by discarding from your hand a card with the same number of Crows on it. Once you spell the word Murder it completes your murder story which you read out loud to win the game. 2-5 players, 15 minutes, ages 12+.

Dungeoneer: the original dungeon-crawl-on-cards published back in 2003, this game has become a classic with 7 expansions, translation into multiple languages, and is still in print. Each player is dealt a Hero card and 3 Quests. The cards create a dungeon map filled with monsters, traps, and treasures. Each turn as you move you collect Glory which you use to play cards beneficial to you, but you also collect Peril which your opponents use to play cards unfavorable to you. The first to complete 3 Quests wins the game. 2-4 players, about an hour, ages 12+.

Hawkmoor: currently in development, this is a cooperative board game set in the fantasy world of Hawkmoor. It is a medium complexity game for 1-5 players for young and old alike. 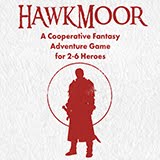